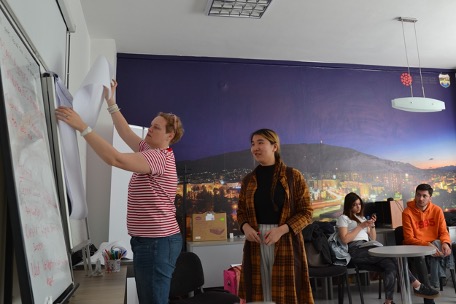 The filmmaking training in Skopje took place between the 18th and the 22nd of April, and it was given by the Dutch trainer Nienke Eijsink and the local trainer Hanis Bagashov. The 9 participants, with ages varying from 17 to 26 years-old, were very much looking forward to gaining more experience in filmmaking and particularly to use it to engage with matters of gender equality and human and LGBTQ+ rights as they told us that it was common for young people within their circles to have to deal with conflicts related to these topics.

On the first day, encouraged by the first bits of theory and from the examples of some films made by the trainers of the workshop, they soon went on to filming their first short movies, consisting of only five shots. The challenge was to create and advertise a product related to gender equality or LGBTQ+ issues that they wished already existed. The final products included a lipstick to be used by anyone regardless of their gender; a necklace which worked as a whistle that women could use to scare off anyone chasing them down the street and a smelly chewing gum which served the same purpose.

The following days were spent learning some more theory and getting acquainted with practical examples, whilst also debating ideas for their individual final projects with which they will apply for a mini-grant. Besides, the Dutch filmmaker Claire Zhou, who was present in Skopje for the screening of her film as part of the Queer Film Days, also took part in the workshop by giving a lecture about character development and storytelling.

On the last day of the workshop, the participants delve into the adventure of an eight-hour film project. They started with concept, writing and pre-production, followed by shooting and then editing.

In the evening, all the films were screened in the Public Room, a creative space in Skopje. The first film to be shown was directed by Sofjia and Igor, who presented the story of a woman who quit her job after being mistreated by her boss, and decided to go on an adventure with a friend. In the end, the audience realizes that they are actually in love with each other unlike what would be commonly assumed at first sight. In the next film, Ivana, Kristijan and Antonella portrayed a universe where being gay was the norm, and presented the dynamics of a family where a son has to come out as straight to his two mothers. On the other hand, Andjela, Iskra, Angela, and Kris made a short film about an alien who lands on Earth and tries to take up a human form as he goes. Because the alien isn’t aware of society’s gender roles and stereotypes they end up breaking them, reflecting how much those are just a social construct.

As we wrapped up the day, everyone felt very pleased with the happenings of the last few days and left very excited to see what the participants will do in the near future with their individual documentaries.