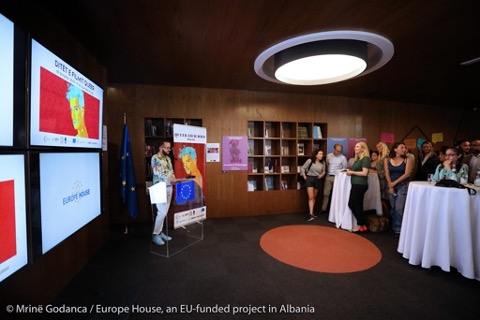 Between 18-22 September 2019 a new film event happened in Tirana, Albania. Entitled “Queer Film Days” (QFD), the program consists of a number of films and events which highlight topics that refuse to be invisible and tell stories that “create a new cultural space”.

QFD has been organised by Open Mind Spectrum Albania (OMSA), headed by Arber Kodra, and in collaboration with the Embassy of the Kingdom of the Netherlands in Tirana, the EU delegation, Stitching Art.1 and the International Human Rights Film Festival Albania (IHRFFA).

The events are also a part of the Youth Activists for Change (YAC) project which is supported by the Ministry of Foreign Affairs of the Netherlands. YAC aims to empower filmmakers, storytellers, artists, and activists in creating art and performances focused on human rights/LGBTIQ+ rights and gender equality.

The festival opened on 18 September with a second showing of the award-winning exhibition ‘Culture of Humiliation’ by Macedonian artist and human rights activist Antonij Karadzoski. Through his artwork, he aims to break down stereotypes and raise awareness of important human rights issues such as bullying in the LGBTI community. The event kicked off at Europe House.

A number of films were shown over the days of the event, the first of which is ‘I Am Sofia’. This film was screened 19 September at Kinema Millenium and a Q&A with the director took place afterwards.

On 21 September it was a matinee of films ‘Scar Tissue’, ‘High Tide’, and ‘Up Close and Personal’ which was shown at Europe House.In attendance were Dutch LGBT police officers Marja Lust and Abdel Late, and a Q&A will take place.

The last day of event 22 September took the shape of a presentation of the final results of the filmmaking training undertaken by Youth Artists for Change Project including individuals from both Albania and Kosovo.