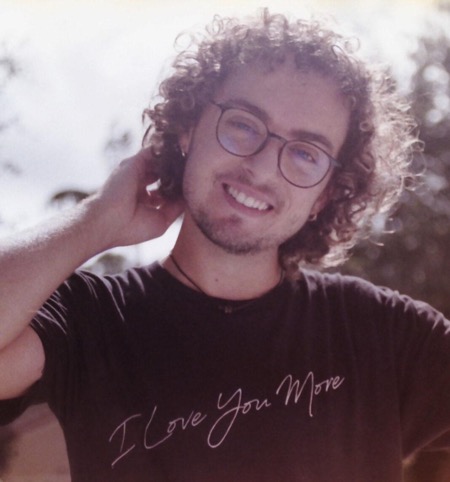 Born and raised in Kosovo, non-binary filmmaker Erblin Nushi has already won a raft of industry accolades including a student Academy Award and a regional student Emmy for their 2018 short film “BINI.”  Now the 28-year-old is about to embark on shooting their first feature film “I Love You More.”

We sat down with the burgeoning filmmaker to find out more about their latest production and delve deeper into the importance of seeing queer stories increasingly normalized on our screens.

Art.1: Tell us a bit about your upcoming film.

I’m in pre-production right now and we’ll be shooting very soon. I always say [the film] is both a love letter to teenagers, as well as an educational resource for their parents in understanding their queer child, and how to not lose or harm that relationship – as most parents just kick their kids out, ultimately missing out on the chance to get to know their child altogether.

It’s based on a true story about moving to America [with my family] and falling in love for the first time. It’s about that first big romantic love, but also the love that we have for our parents, and the love they have for us.  How we sometimes – as teenagers – find it hard to maintain both.  When you’re young, first love can be blinding, and it makes you do things you don’t necessarily want to do, such as pushing people away.

But for that reason my film is called “I Love You More.” A mother is always the one that will say it to you and truly mean it. That’s the ultimate message behind the movie.

Art.1: In 2019 you spoke at our panel on the impact of artivism in the Balkans during PriFest. In what ways do you believe art can have a societal impact?

I lived in Kosovo for 17 years, and when [I was growing up] I didn’t have anyone to look up to. Fortunately I had movies, and they were my escape. I was locked in my room because I was bullied and I didn’t have a lot of friends. Watching queer films on my computer was the only way I could see that there were more people like me out there and that I wasn’t alone.

I want kids in Kosovo, Albania, and all over the world to see a [queer] movie that’s in their language. I want kids in villages without access to queer support organizations, to watch the movie from their computers or phones. I want them to know that there is a movie in their language about two boys loving each other, and that it’s completely normal. I think, above all, that art has the power to change people.

Art.1: There are more and more films with LGBTI+ characters and storylines, in what ways does your film stand out?

I want to make a film that normalizes queer love beyond violence and excessive hardships. I want it to be a very normal queer romance because not only is there a lack of romance associated to queer culture, but there’s no such thing as a “normal” queer romance. I think it’s important for people to see a queer film that doesn’t involve all the hardships, though they are very much there. I want people to get used to us and [realize] that we’re people too, and that we love just the same way as straight people do.

art.1: How important is family support for queer people?

I had my family’s support but it took 10 years of work. It was education and exposure that made my parents understand. Finally, after a decade, it’s reached the point where my mum makes dresses for me when I do drag. I think film does that or at least it did it for me. That’s why I love telling stories. It was my escape to a world that I couldn’t have reached otherwise. It kept me alive and mentally safe by showing me what anything was possible.

I stood up for myself while also maintaining and safeguarding a relationship with my family. I think art in general, and movies in specific, simultaneously inspire and educate. It’s important to put queer stories within the reach of people so they know they’re out there. I think this film is going to do that for people, with myself as testimony that it’s all possible.